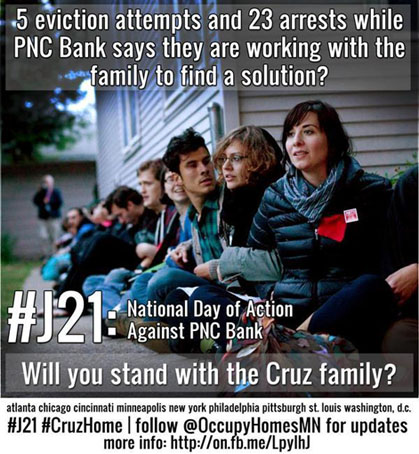 via Occupy Our Homes. Actions in support of the Cruz family and other communities fighting foreclosures are underway in Atlanta, Chicago, Cincinnati, Minneapolis, New York, Philadelphia, Pittsburgh, St. Louis, Washington, DC, and more. Since April 30, Occupy Homes MN has been working with the Cruz family, whose home went into foreclosure when PNC Bank mishandled an online payment. Although PNC executives have acknowledged their error and repeatedly told Cruz supporters that they are working on a solution, their actions have shown the opposite. They have refused to work with the family, instead working with Freddie Mac and the city of Minneapolis to launch a series of costly police raids against home, resulting in 23 arrests in less than a week. Despite ongoing protests, PNC still thinks we’ll go away if they ignore us long enough. It’s time to show them otherwise: on June 19, Alejandra and David Cruz will be travelling along with a team of supporters to PNC’s Pittsburgh headquarters to hand-deliver their modification documents and demand a meeting with CEO Jim Rohr! Occupy Homes MN is calling for a national day of action on PNC to coincide with the Cruz’s arrival on Thursday, June 21.

More on the Cruz Family:

The Cruz family home in Minneapolis, Minnesota, went into foreclosure in 2011 when PNC failed to withdraw an online mortgage payment and then demanded two months’ payment as punishment. Unable to pay more than the current month’s installment, the family home fell into foreclosure.

After their home fell into foreclosure, the Cruzes began working with a local nonprofit that was supposed to be working out a loan modification. In February, without warning an agent of the bank came to the house and told them they had 48 hours to leave the property, shocking the family and ignoring their right to a legal process.

Alejandra and David Cruz have been active community members in the Twin Cities who have tirelessly advocated for the DREAM Act and educational equity for immigrant students.

Over the past month, hundreds of neighbors and community members have mobilized to defend the Cruz family home and support a 24/7 physical occupation of the house against repeated attempts at eviction by the Minneapolis police and sheriff’s department. These efforts have brought the Cruz’s struggle to the attention of national media and into the offices of PNC Banks across the country.

However, despite repeated claims from PNC Executives that they are working “to help and rectify the situation,” the bank has yet to take the necessary steps to sit down and negotiate with the family. Activists have urged PNC to keep its word to the Cruz family and keep communities intact.

"This family can afford the mortgage. All they need is for PNC to take a look at their documents and verify the facts. At this point we’re happy to hand deliver the docs to their front door." said Anthony Newby with NOC. "This foreclosure process has been botched and bungled from the very beginning and PNC needs to fix it. The family can pay and deserves to stay."