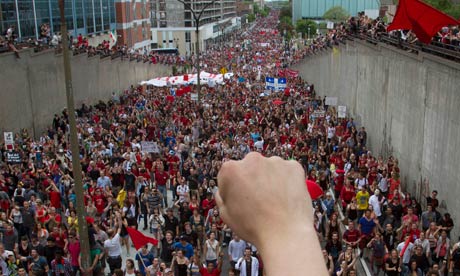 Thousands of demonstrators march to mark the 100th day of a student strike against tuition hikes in Montreal, Quebec, 22 May 2012. (Photograph: Olivier Jean/Reuters)

At a tiny church tucked away in a working-class neighbourhood in Montreal’s east end, Quebec’s new outlaws gathered on Sunday for a day of deliberations. Aged mostly between 18 and 22, their membership in a progressive student union has made them a target of government scorn and scrutiny. And they have been branded a menace to society because of their weapons: ideas of social justice and equal opportunity in education, alongside the ability to persuade hundreds of thousands to join them in the streets.

Under a draconian law passed by the Quebec government on Friday, their very meeting could be considered a criminal act. Law 78 – unprecedented in recent Canadian history – is the latest, most desperate manoeuvre of a provincial government that is afraid it has lost control over a conflict that began as a student strike against tuition hikes but has since spread into a protest movement with wide-ranging social and environmental demands.

Labelled a "truncheon law" by its critics, it imposes severe restrictions on the right to protest. Any group of 50 or more protesters must submit plans to police eight hours ahead of time; they can be denied the right to proceed. Picket lines at universities and colleges are forbidden, and illegal protests are punishable by fines from $5,000 to $125,000 for individuals and unions – as well as by the seizure of union dues and the dissolution of their associations.

In other words, the government has decided to smash the student movement by force.

The government quickly launched a public relations offensive to defend itself. Full-page ads in local newspapers ran with the headline: "For the sake of democracy and citizenship." Quebec’s minister of public security, Robert Dutil, prattled about the many countries that have passed similar laws:

"Other societies with rights and freedoms to protect have found it reasonable to impose certain constraints – first of all to protect protesters, and also to protect the public." Such language is designed to make violence sound benevolent and infamy honourable. But it did nothing to mask reality for those who have flooded the streets since the weekend and encountered police emboldened by the new legislation. Riot squads beat and tear-gassed people indiscriminately, targeted journalists, pepper-sprayed bystanders in restaurants, and mass-arrested hundreds, including more than 500 Wednesday night – bringing the tally from the last three months of protest to a record Canadian high of more than 2,500. The endless night-time drone of helicopters has become the serenade song of a police state.

In its contempt for students and citizens, the government has riled a population with strong, bitter memories of harsh measures against social unrest – whether the dark days of the iron-fisted Duplessis era, the martial law enforced by the Canadian army in 1970, or years of labour battles marred by the jailing of union leaders. These and other occasions have shown Québécois how the political elite has no qualms about trampling human rights to maintain a grip on power.

Which is why those with experience of struggle fresh and old have answered Premier Jean Charest with unanimity and collective power. There are now legal challenges in the works, broad appeals for civil disobedience, and a brilliant website created by the progressive CLASSE student union, on which thousands have posted photos of themselves opposing the law. (The website’s title is "Somebody arrest me" but also puns on a phrase to shake a person out of a crazed mental spell.)

And Wednesday, on the 100th day of the student strike, Québécois from every walk of life offered a rejoinder to the claim that "marginals" were directing and dominating the protests: an estimated 300,000-400,000 people marched in the streets, another Canadian record, and in full violation of the new law. They brandished the iconic red squares that have now transformed into a symbol not just of accessible education but the defence of basic freedoms of assembly and protest. Late into the night, a spirit of jubilant defiance spread through the city. On balconies along entire streets, and on intersections occupied by young and old, the sound of banging pots and pans rang out, a practice used under Latin American regimes.

The clarity that has fired the students’ protest has, until now, conspicuously eluded most of English-speaking Canada. This is because the image of the movement has been skewed and distorted by the establishment media. Sent into paroxysms of bafflement and contempt by the striking students, they have painted them as spoiled kids or crazed radicals out of touch with society, who should give up their supposed entitlements and accept the stark economic realities of the age.

All this is said with a straight face. But young people in Quebec, followed now by many others, have not been fooled. They know the global economic crisis of 2008 exposed as never before the abuses of corporate finance, and that those responsible were bailed out rather than held to account. They know that meetings of international leaders at the G20 end by dispatching ministers home to pay the bills on the backs of the poorest and most vulnerable, with tuition hikes and a toxic combination of neoliberal economic policies. And with every baton blow and tear-gas blast, they perceive with ever greater lucidity that their government will turn ultimately to brute violence to impose such programs and frighten those who dissent.

To those who marched Wednesday, and the great numbers who cheered them on, the fault-lines of justice are evident. This is a government that has refused to sit down and negotiate with student leaders in good faith, but invites an organised crime boss to a fundraising breakfast; a government that has claimed free education is an idea not even worth dreaming about, when it would cost only 1% of Quebec’s budget and could be paid for simply by reversing the regressive tax reforms, corporate give-aways, or capital tax phase-outs of the last decade; a government whose turn to authoritarian tactics has now triggered a sharp decline in support, and which has clumsily accelerated a social crisis that may now only begin to be resolved by meeting the students’ demands.

As the debate went on at the CLASSE meeting in the church last Sunday, the students’ foresight proved wise beyond their years. "History doesn’t get made in a day," one argued into the microphone. Not in a day, no doubt, but in Quebec, over this spring and the summer, history is indeed being made.

Martin Lukacs is a writer and activist, and an editor with the Canadian grassroots newspaper the Dominion