Long before anyone was paying attention, Lillie Paquette was listening. Her debut film, screened before a diverse audience of World Bank staff and guests, recounts the prologue to the Egyptian revolution. We Are Egypt: The Story Behind the Revolution follows opposition politicians and civil society groups over the course of the two years leading up to the mass uprising. With the benefit of hindsight, the ultimate conclusion in Tahrir Square appears inevitable, but for the men and women struggling for change it was a long process, with many setbacks. Though the film ends before February 11, 2011 when former President Mubarak stepped down, and focuses on the painstaking work of organizing and building institutions, it is an engaging and valuable historical document. It also demonstrates how those seeking change build their own networks and solidarity. As one of the main protagonists, Ahmed Abd Rabo, comments at a gathering of activists following their release from mass detention: “We were arrested as individuals and came out as a group.” 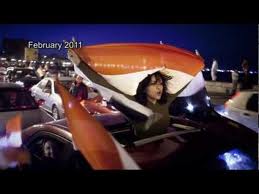 For the audience, the film is an opportunity to appreciate the range of voices that make up contemporary Egyptian society, and to understand the origins of many of the social forces that will be shaping its future. These are voices that were ignored for too long, but now demand to be heard. Their cry for social and economic inclusion has reverberated around the Middle East and North Africa and had a global impact. In the words of Inger Andersen, World Bank Vice President for MENA, who introduced both the film and the filmmaker: “Everybody is now listening.”

I spoke to Lillie Paquette about her remarkable first film:

The Egyptian revolution has become popularly known as ‘the eighteen day uprising that brought down the Mubarak regime.’ What’s missing from this account?

Lillie Paquette: The reaction I’ve had from many people has been that, at the end, they say: “Oh, that’s what happened!” Because you see this was something that was boiling for years and years. Of course, it began long before I even got there in the fall of 2009. But in the film, I examine the period in 2003, 2004 and 2005 when there was actually the first “Arab Spring,” which is how they referred to it then, when lots of the movements were born, like Kefaya. That was a period when there were lots of people who were starting to speak up against the Mubarak regime. But it depends on where you decide to start your timeline. The Egyptian labor movement has a rich history dating back to the 1940s. One of the great quotes in the film comes from a woman at a labor protest. She say: “it’s waves, it comes and goes, we’ve had it throughout our history,” and she adds, “if we keep getting these waves that are coming and going, it will turn into a revolution one day.”

You began making this documentary long before Egypt was in the headlines, and the social movements gained international recognition. What sustained you during the two years of production?

Lillie Paquette: There were a lot of ups and downs. Sometimes I would ask myself: ”Why am I here?” And I felt kind of in solidarity with a lot of the activists. We used to talk about this all the time, on and off camera, about what sustained them, to keep fighting in their struggle, and pushing for something that they didn’t necessarily see an answer to. When I got to Egypt, I had what I had learned about in books, and a couple of visits to Egypt, but I really didn’t have an in depth understanding. When you’re living there, with them day in and day out, and going to all their events, and talking to them and seeing them through their ups and downs… At the same time as I was going through my learning process, as a first-time film maker, not really sure what I’m doing. It was an interesting and very rich experience, and I think the main thing that sustained me was my relationship and friendship with the people that I got to know there, and watching their struggle, and sort of participating in it, in a strange way. Not that I was fighting for the freedom of my country or democratization, but I was, in a way, part of it; on my own journey, making this film.

Looking back from the perspective of the first anniversary of the revolution, what lessons do you think the film conveys?

Lillie Paquette: People seem to want a beautiful, perfect story with a nice ending, with Egyptians on this path to democracy. But all these things continue to unfold and we can never say: “OK, this is the end of the story.” Every time I screen this film, and I screened it all of last year, at various universities and other venues as I developed the film, and every time I’ve shown it, people have said: “Well, what about the current situation? Why don’t you bring it up to date, as it ends before the revolution?” And I respond that it has to end somewhere. This story is not going to stop unfolding. I know they’re on the right path, the Egyptian activists and citizens, but who are we to say, on this side, what the best situation is for them. This is their growing pains.

Do the activists have a sense that their political horizons have expanded?

Lillie Paquette: Absolutely. The most amazing accomplishment that this whole experience has brought about so far is this “can do” feeling. Every time I talk to them, they say no matter what happens politically, we still own the streets. The people tasted that, in huge numbers, in ways that I could never have imagined – no one could have ever imagined seeing all those people in Tahrir Square. That is something that has been tasted and people understand and feel that they now own that. They could do that again.