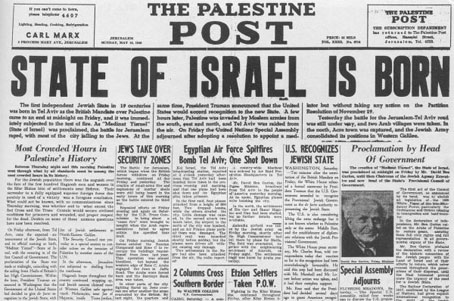 The Palestine Post, which later became The Jerusalem Post, reports on the end of the British Mandate and the declaration of the state of Israel in May 1948. It also reports on the continuous fighting that had begun in November of 1947 when the UN approved the partition of Palestine. (Photo: copyright expired)

Recently, a public event planned in East Jerusalem by the “Palestine Israel Journal” was cancelled due to criticism from Palestinians that it represented "normalization." The previous week, a meeting organized by the “Israeli Palestinian Confederation” was stopped by a few dozens of young Palestinian demonstrators denouncing what they described as “normalization with Israel.”

The issue of normalization is not new and it didn’t start in Palestine. Rather, the discussion began in the Arab countries, in the 1950s. On several occasions during the last three decades, the Alternative Information Center, a joint Palestinian-Israeli organization, has initiated symposiums and seminars about normalization in order to try to explain it to Israeli activists. We have also tried to clarify what normalization means in practice… and what it doesn’t mean.

The recent debate around the meetings planned in Jerusalem and Beit Jala, in which Israelis and Palestinians were supposed to take part, has reopened the discussion. We will deal with the issue of normalization in a three part series to be published this week, hoping it will provoke a constructive political debate.

The State of Israel was imposed on the Arab nation, in general, and the Arabs of Palestine, in particular, by the United Nations. The UN resolution that effectively created Israel was adopted by a small majority of the UN General Assembly on November 29, 1947. The following circumstances set the stage for the creation of a Jewish state in Palestine, which was under British Mandate at the time:

—The recent Jewish Genocide by the Nazi regime

—The decline of the British Empire

The massacre of 6 million Jews of Europe between 1940 and 1945, and the active collaboration of the ruling elite in most European countries, raised two issues. On the psychological level, a sense of guilt and responsibility developed among some European intellectuals and political leaders, followed by a growing consensus that an effort should be made to repair the colossal crime of genocide This guilt alone wouldn’t have been enough to push the international community into action. It was the presence of hundreds of thousands of Holocaust survivors, wandering all over Europe, that begged a practical solution.

The Eastern Europe "Yiddishland" had been eradicated by the Nazis and their collaborators. Holocaust survivors who attempted to return to their countries encountered hostility and, sometimes, massacres. They had nowhere to return to and, needless to say, the Western countries were not eager to provide them refuge—including the United States which only provided a limited number of immigration certificates.

Palestine became then a kind of alternative solution.

Before the rise of Nazi anti-Semitism, the Zionist project appealed to very limited segments of both Jewish and international public opinion. In fact, it was perceived either as a reactionary colonial project doomed to fail (by the General Jewish Labor Bund and famous philosopher Hannah Arendt, for example), or it was viewed as a romantic but unrealistic utopia (the majority of the Jewish bourgeoisie), or as a downright blasphemy (Orthodox Judaism). Until 1933, it seemed highly unlikely that the Zionists’ modest colonial enterprise, revolving around collective farming communities, would become a full-fledged modern state. But Nazi anti-Semitism provided the opportunity to radically change the nature of the Zionist project. Hitler’s rise saw a new wave of well-trained and highly educated Jewish immigrants coming to Palestine with modern technologies, know-how, and capital.

In 1945, hundreds of thousands of survivors that no Western country wanted to host provided both the pretext and the human material for the fulfillment of the Zionist project: a Jewish State in Palestine. The indigenous Arab population of Palestine, a group that was not responsible for the Holocaust, was the victim of the Western decision to repair for the crime of genocide that occurred in Europe.

No wonder the Arabs and Palestinians opposed the UN Partition Plan of 1947, which allocated a majority of the land to the new Jewish minority.

The decline of the British Empire

Great Britain won World War II against Germany but lost its empire and became a second-rate power. This left a vaccuum in the Middle East and, with the overt assistance of the Soviet Union and, more indirectly, the United States, the Zionist movement seized this opportunity to obtain UN support for a state in Palestine and to launch a “War of Independence." Following the UN vote, Jewish sovereignty was extended by military force on much more territory than what was allocated in the UN Partition Plan. Israeli forces carried out plans to ethnically cleanse these areas of their indigenous Arab population, an event known in Arabic as the nakba or catastrophe.

The Arab population of Palestine couldn’t effectively resist the UN Partition Plan for three reasons: (1) the collaboration of reactionary Arab regimes with the British Empire; (2) the agreement between the Hashemite Kingdom of Jordan and the Zionists to divide the territories allocated to the Arab State of Palestine among themselves; and (3), the most important: the defeat of the 1936-1939 Arab Revolt in Palestine and increased British repression which essentially decapitated the Arab national movement in Palestine.

Indeed, it took almost three decades following the creation of the state of Israel for a new Palestinian national movement to emerge, under the leadership of Yasser Arafat, putting the issue of the national rights of the Palestinian people back on the international agenda.

The State of Israel managed to impose its existence on the Middle East, but couldn’t force recognition from either by the Arab regimes nor by the Arab masses. Normalization with the state of Israel was unanimously rejected, though some regimes kept hidden relations – especially on the security level – with the Jewish state.

This is the first in a three-part series discussing normalization between Israelis and Palestinians. A hotly contested issue in Palestinian society, anti-normalization sentiments have deep historical roots.

If you’re not careful…
The most effective way to restrict democracy…
On Your Knees Woman!
Human rights: A global challenge
Riwaq Al-Shabab